I have this patient with severe bone loss on both upper and lower jaws. He wants implant-retained overdentures. My plan is: 1. For upper denture: 3.5x8, 3.5x10, 3.5x10, and 3.5x8 mm locator implants at positions 4, 6, 10, 12 locators for full coverage overdenture. Patient wants palateless, but does not want bone graft for posterior implamts. Is it possible? 2. For lower denture: three 3x11.5 mm implants at positions #22, 25, and 27 and bar overdenture retained by locators. What are your thoughts, suggestions? Thanks! 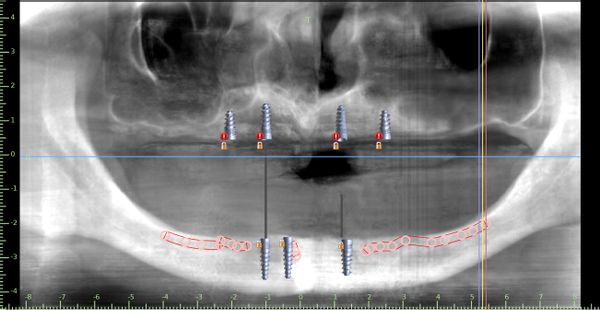 New comments are currently closed for this post.
Dr Joe Nolan
5/18/2022
Sounds fine, I'd be happy to treat a patient with your set up...have you a CT btw?
Dennis FlanaganDDSMSc
5/18/2022
4-5 mini implants would probably be best
Jason Larkin DMD
5/18/2022
I would do 3.8 x 10. I've had trouble with 3.5 x 8. I would make sure you engage tip of implant 1mm through hard sinus floor.
Tim Carter
5/18/2022
No problem with what you have planned from a surgical perspective but it might be better to place only 2 fixtures on the lower. I too used to "tripod" the mandibular denture until I started seeing patients come back with worn out abutments and going through inserts very quickly. Remember that the lower denture is soft tissue supported and implant retained so the only purpose of the implants is to keep the denture in the patient's mouth. There are many great clinicians that speak about this and one that comes to mind is Dr. Kim Daxon (Dawson Academy). Don't be afraid to place 10mm fixtures in the posterior maxilla either... I have no problems with 8mm fixtures except that when dealing with maxillary overdentures you are stepping off into the area of implant dentistry with the highest incidence of failures and engaging that sinus floor will at least help your confidence with the added primary stability.
Tim Carter
5/18/2022
Consider using a Locator bar so the maxillary fixtures are splinted and use 2 individual Locators for the lower...
Tim Carter
5/18/2022
I am curious what respected clinician and or literature out there would advocate for "mini" implants over well placed conventional fixtures??? To my knowledge most of the "Mini" implant products have been discontinued after their brief episode of fame.
Asja
5/18/2022
Only for the mandible. Splinted 4 implants for the maxilla and you can reduce palatal coverage
Michael McClure
5/18/2022
Sorry, but that treatment plan is a horrible idea. The number one failure for a full arch restoration is a maxillary overdenture. Add minimal lateral support due to excessive bone resorption and you’ve got the perfect storm for failure. Splinting those implants with a bar will help for sure but if you can improve your AP spread with the implants and have sufficient bone laterally all the way around those implants a fixed restoration will work best. As for the lower, an overdenture works well even with only 2 implants, if you have arches sufficient for support, which you don’t. An overdenture will also continue to put pressure on the posterior segments eventually resulting in a dehiscence of the mandibular canal and pressure pain. If you get at least 4 implants in the mandibular a fixed option will work by far the best. Don’t cantilever anymore than 12mm past the posterior most implants.
Greg Kammeyer, DDS, MS
5/23/2022
You've got great advice below, except I don't support the mini implant opinion. In the maxilla, unless you are going to cover the palate I would stay away from tissue supported prosthetics and mini implants. (Note that the major implant manufactures don't sell mini implants and that generally their success, beyond the mand ant is below 95% in the literature...which is all retrospective.) Without palatal coverage, a tissue supported prosthesis becomes implant supported, as the tissue/bone resorbs. In the mandible we can get away with that all day long, as the anterior bone is so dense. In the maxilla the literature shows much higher implant failure rates in general. So splint the maxillary implants and I agree, (if you are doing sinus lifts), engaging the maxillary sinus floor gives much more primary stability. With the sizes you are using there, I would favor 5-6 implants....As Carl Misch put it: " over engineer the case". He noted that redoing failing implant work is much more complex than a new crown, is costly, loses your momentum, your teams confidence and eats alot more chair time and most importantly disappoints a patient that has HIGH expectations. In the mandible, I would use 2 implants (use the 3rd on the upper arch!) and I would place the implants in the lateral incisor positions with enough interarch space on the mand prosthesis that if the patient wants to upgrade later, you have adaquate interarch space for the prosthetic as well as you haven't blocked out the sites for adding 2 implants for the tilted distal implants for an all on 4 case...Good luck.
Dr Mahendra Bagur MDS FDS
5/27/2022
Have you ever considered single piece cortical implants...? If not, may be good idea. Best wishes.
MAHENDRA AZAD
5/30/2022
In cases of severe bone loss, Customized Subperiosteal Implants with 3D Printing Technology are worth considering. I have done some cases with good results.
Kent Mueller, DDS
6/1/2022
at the # 4 & 13 approximate locations you have a good deal of available bone to support a 3.7 x 16 mm implants positioned palatal & mesial to the anterior max sinus architecture; this positioning may best protect the implant body from a facial dehiscence associated with overdentures , as it remains well protected by encapsulating bone . Place 7 & 10 implants slightly angled disto-palatal to pick up an extra 1mm vertical bone without apical collisions with 4,13 I suggest this only as an consideration, as I have used locators on the max 4 positioned implants as above with an all acrylic modified overdenture, opposed by a mand 2 locator overdenture. The patient had a demonstrative gag reflex; I needed an emergency solution with all acrylics in the overdenture prosthetics / (able to engage 1/3 anterior palate) . this transitional configuration has become long-lasting and somewhat more economical / the patient will not give up on this arrangement in favor of a more laboratory engaged solution. Indeed, for SOME patients, 'less' may be 'better' Best. klm
Richard Benian
6/3/2022
Can't determine appropriate Tx Plan without a CBCT, Get that first!